What are some top kid’s birthday party activities? 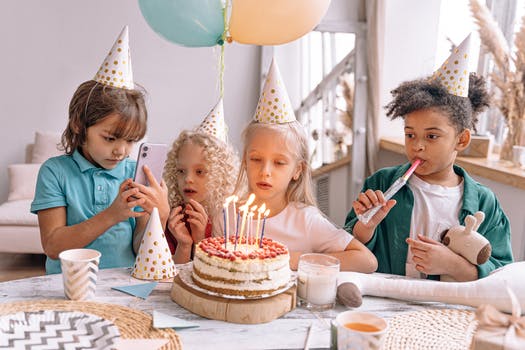 Regardless of how amazingly organized your party is with cakes and decorations, you know the kids are going to get bored within a few minutes of the party. Where many kids’ birthday party activities are too time-consuming and hectic to organize, we are armed with the top 8 effortless birthday activities that you use to instantly amp up any party.

This game is perfect if the birthday is in October. The way you play is to divide your friends into groups and ask one member from each group to be the mummy. Grab a few tissue rolls and ask them to cover the mummy with it. The one who wraps the mummy with tissue paper the quickest wins. This is a quick and fun way to get your little ones excited and have something fun to remember her birthday.

However, you can also add your own variations to this game and turn it into a fashion show where kids have to dress the mummy in a fashionable way and have them walk the runway at the end to show the best tissue outfits.

This is a game that can take hours to finish. Therefore, you can count on filling the birthday party with an engaging and entertaining game. Start by dividing the children into groups ( preferably two) and give them grocery bags filled with props. This can include kitchen utensils, toys, makeup, printed props, and costumes. Without giving them time to check the items, allocate a deadline before which they have to finish off the preparation and come up with a skit to perform.

Here’s the fun part, they will only have the crafts and pros you have given them. They can go as creative as possible to come with the story and characters. It can entail anything from talk shows, TV commercials to cooking shows. Regardless of whatever they have prepared, ask them to stop once the timer has run out. After the skit, you can reward the kids who appreciate their participation and ensure they enjoyed each second of the birthday party.

This game is excellent for pool parties. Blast some songs and get two people to hold the limbo lower and lower as the last person is shimmying their way under the limbo stick. The stick can be anything from a pool noodle, PVC pipe to a broom to make it work. If you want to go the extra mile, you can also decorate it with some wrapping paper and ribbon to give it the ever-needed birthday flair.

4. Compete in the Candy Olympics

Candy Olympics is everything the kids need to have a blast at the party. It is exciting enough to keep them engaged, the team player factor can build connections and the delicious candies can be the biggest motivating factor to keep them playing the game.

The game requires you to set up a circuit of tasks that kids will be doing to complete the game. Although you are free to add your own variations and mix it up a little bit, here is a suggested way of playing Candy Olympics.

Set up three candy stations and do a rally race with a) who-can-fit-in-more-marshmallows in their mouth challenge b) licorice baton and c) a Smarties Chopstick Challenge where kids have to take one smarty on a stick at a time and pace it into a bucket across the room. The team with the largest number of Smarties wins. You can have a set tie for each station so they don’t spend too much time stuck with one.

You can also take it to another level and offer awards to the winners and something for the rest of the participants.

5. The Floor Is Lava

Regardless of how many times you have played this game, it is never getting old. This exciting yet simple game is very effortless to prep and is still better than most of the birthday activities out there. You only need cushions to prevent the lava.

This is one of the games that you can keep on playing until the party finishes. Split the children into 4 to 8 each so you have enough on both sides to compete. Form a line and the first child withhold a balloon or ball in front.

On o’, the first child must pass the ball alternatively backward over the head or in between legs until the ball or balloon reaches the last person in the line. Then the last one will switch places with the first one and start the game over. Although it isn’t as exciting as the rest of the games mentioned above, it can get quite addictive as there is no end to this game.

This easy and fun game is everyone’s favorite at any birthday party. Step up chairs or cushions that are one less than the number of players. Blast a song and let one person pass it without looking at the game.

The person who is left out once the music has stopped will be out of the game. Keep removing one chair until you have one last chair left to finish the game.

If you have played beer ping pong, you probably know how to play this game as well. Label each solo cup with a random number from 1-5 with up to 15 cups on the floor. Create a 5-row pyramid to get it ready for the game.

Mark the floor with tape to let the player know where to stand and throw the ping pong ball. Add up the number of solo cups that each player has gained throughout the game. In the end, you can count up the totals and declare a winner. You can also glue the cups to a cupboard to make sure to turn this one-time game into a permanent one that you can use at any party.

If you want to offer a return gift to the gifts, nothing is better than using stuffed animals as awards to the winners and a smaller one to appreciate the participants.